The K1200LT Ibus interface is really easy to install. If you can swap the radio, then you can fit the interface just as easily. There are just three / four connections to the radio end of the BMW loom to make it work.

* The BROWN wire from the module is the GND connection which connects to a BMW BROWN in the radio loom.

* The WHITE with PURPLE stripe from the module is the Ibus connection which connects to BMW WHITE/PURPLE in the radio loom.

Then are two options: Either connect the RED and YELLOW wires together and connect them to the radio’s wiring loom if it has an output to feed an amplifier etc. This is normally coloured BLUE/WHITE.

* The RED wire from the module is the 12V ACC connection wire, which connects to the BMW PURPLE/YELLOW in the radio loom.

* The YELLOW wire from the module is the permanent 12V line and connects to the BMW RED in the radio loom.

Typical wiring for any ISO type (the most common) radio heads.  Note that this is not always followed by manufacturers and you will need to check your own manual for confirmation. In particular, the ISO yellow and red are sometimes swapped, Sony is typical for this.

The switched output may be called "Electric aerial" or "amplifer switching". It may be blue or blue/white.

It is strongly advised that the BMW plug is cut off, along with the ISO plugs and the connections made by soldering and sleeving.

Switch the ignition to the first (acc) position. Press the BMW ON button and the panel should light up and the radio will come out of standby. Now press the BMW MEM button for a count of five. This will synchronise the two together. At this point, you should see something in the display. Pressing BMW CD should change the display.

If the display remains blank or says “no radio” and the control panel shuts down after 30 seconds, the module is not receiving the Ibus commands. Re-check connections, paying close attention to the white/purple wire

For Infra Red blaster control, (not applicable to Pioneer radios):

Once connected, just feed the blaster wire around the rubber radio surround as shown and stick it down near the IR sensor in the radio, using the supplied adhesive pad. If you are not sure where the sensor is, leave it loose temporarily and experiment with the position until it is reliable. The module itself can be stuck to the top of the radio, behind the plastic shield using the supplied Velcro pads. That is the basic installation complete. If you would like to be able to easily update the software, plug in a mini USB cable and bring it into the front tray, down the side of the rubber sleeve like this: 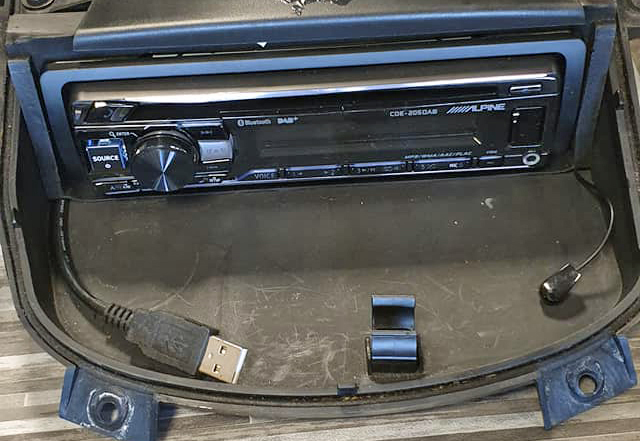 Here, the blaster has not yet been fixed into place, but it should be stuck down close to the radio adjacent to its IR sensor. If you don't know where that is, leave the blaster eye loose and experiment with its position left or right until control is reliable. Alpine DAB radios tend to be on the right as you look at the front panels. None DAB tend to be on the left, but experiment if not sure. The radio manual might also show the location.

Here are the control connectors on the module. On the left is the 2.5mm socket for the IR blaster and on the right there is a 3.5mm socket for hardwire control for radios such as the Pioneer. You will only use one or the other.

Connect the provided 3.5mm stereo cable between the radio's 'SWC' socket and the matching line socket on the module. Be careful not to put it into the radio's MIC socket accidentally.

Control output. There is a switched output in the module that can be controlled by the Stingray button of your choice if enabled in the software. By default it is controlled by the SC/RP button. When pressed, it provides a low current switched ground signal to control a relay etc and you will see LightsON appear on the display.

On request it can be configured to control a radio transceiver’s PTT instead (Amateur radio / CB / PMR) and then the radio sound will be muted when in TRANSMIT mode.

This output appears on pins 4 (switched gnd) and pin8 (12V) of the interface's socket. A matching pair of terminals and length of wire is supplied in the kit that you can fit into the plug and then connect a suitable relay if required. The optional output is capable of sinking up to 100mA, so only connect a relay to it and not a load directly.  The pins needed for this are the two on the left of the connector, top and bottom but the numbers are moulded into the plug.

On the left, the top and bottom pins 1 (Gnd) and 5 are for a digital output for those who want to interface to another microcontroller etc.

From time to time, new features will be added, the module is easy to update at home via a computer. Instructions can be provided for those who wish to do that. It requires very little computer literacy, but support is there for anyone wishing to update the firmware. If the recommended USB cable was fitted during installation, it will only require a USB extension cable and a handy computer. Full instructions will be provided on request, plus any help that may be needed.

The latest version of software will be available on the AJL Electronics website for registered users to download at no cost, using the 100% discount code that is only provided with the purchase of a module.

As standard, the controls work in a logical way, much like the original operation subject to the limitations or idiosyncracies of the radio installed.

These controls all work as per the original BMW radio..

These controls may vary, depending on the particular new radio fitted...

CD* always operates as if you are pressing the Source button on the radio.

FM always operates as if you are pressing the Band button on the radio.

AM cycles through memory presets on some radios. When source is in USB Audio mode, it enables the repeat function on Alpine.

TONE is used to activate the Voice function on a connected 'phone.

MAN is used with Alpine to manually accept or reject an incoming call. Brief press to accept and long press to reject.

SCRP is used to toggle the optional relay function for lights or PTT control.

ON always works as standard to put the stingray and radio in and out of standby.

MEM allows the display to be re-synchronised if need be. If the radio has been disconnected, a long press will synchronise the display with the radio. The radio needs to be in its power on startup configuration of source 1, band 1, preset 1.

It is hoped that Speed controlled volume will be added to the software in the near future. Also more native compatibility with other radio brands will be added on demand.

Important notes concerning the limitations of the factory display:

As there is no physical connection between the radio and the display, it is not possible to show dynamic information. Scanning progress and channel names etc can not be displayed. Information that is displayed is based on expected behaviour from button presses. We know for instance that the sequence of source and band selections never changes, so the display simply shows the next one every time it sees the button operate.

I hope that you enjoy the benefits that this module brings and that you will tell others about it. If you have any questions, comments or complaints, please let me know and I will give as much personal support as required.